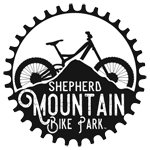 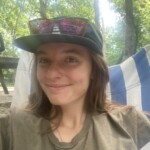 The other day, as I steadily pedaled my way to the peak of Shepherd Mountain, looking down upon the valley through the bare trees, which have finally finished shedding this year’s leaves, I was reminded of where I was this time last year — climbing the mountain for the very first time, falling over as I traversed over chunky rocks, pushing the bicycle up the steeper sections that I did not have the power to keep momentum and balance on, wheezing violently for air, stopping to take another puff of albuterol from my inhaler. The pain in my lungs was as painful as the embarrassment of my struggle being witnessed by my pedaling companion, who patiently supported me throughout my slow accent.

When I met Michael Flieg in September 2021, I had never even ridden a bicycle on a trail before. I went out to Arcadia Valley Outdoors (AVO) campground for the first time with the hopes of finding a good story for the local newspaper and walked away feeling inspired by the pioneering of a powerful industry — the one which gets people outside. Friendship blossomed.

The first time I stepped foot on Shepherd Mountain in October 2021 was also the first time I witnessed the sport of mountain biking. Again, I was there in search of a story — this time about a group of women who had come together for a weekend of riding. Later that evening, as we communed around a roaring campfire at AVO, I asked my questions.

As the strong, kind women around me explained why they loved mountain biking, a knowing that I would not be able to avoid trying it overcame me. Michael smiled at me from where he sat to my left. When I asked him a few days later if he’d be willing to teach me mountain biking, he did not hesitate. He generously put me on a full suspension bike and insisted that I learn to go uphill before attempting to go down. After teaching me a few fundamentals, we went to the mountain for the first time to ride up Coolio’s Climb (our 2.3 mile climbing trail, with the average grade of 5-6 degrees). If you read the first paragraph then you know how that went… When we finally made it to the top, over an hour later, my legs were shaking and my lungs were gasping for relief. I laid on the ground, arms outstretched, atop the hub as Michael made his descent. He returned with the Gator to drive me back down — a frustratingly mundane way to ride down Shepherd Mountain.

It went like this a few more times, often with Michael pedaling ahead to leave me alone in my suffering. I soon began to more skillfully traverse the difficult terrain, and my lungs seemed to be able to take in more air despite their strain. Finally, I was allowed to try my first descent.

As I followed Michael down the green trail for the first time, we stopped frequently as I timidly turned on my first burms. Progress was slow at first, but after a few more times at the mountain, I began to feel more confident — perhaps a bit overconfident. My first crash left me bloody, with a few small rocks pressed into the skin on my back, but it didn’t slow me down. My second crash left me limping for a week and a bit more careful next time I hit the trails.

I have now ridden every trail at Shepherd Mountain, with the exception of Cannonball — though that may change once my health insurance kicks in (just kidding, I know I’m not ready yet. Maybe once I can go down Powder Keg without having to get off my bike and slide down a hill on my butt). I am also now the proud owner of a beautiful Transition Patrol (thanks @devinhines for giving her up)

This sport has given me much to feel grateful for. It has given me my breath back. After suffering from exercise induced asthma for years, I now climb the mountain and barely get out of breath. It has given me the strongest heart, body, and mind that I have ever had. It has given me a community I feel embraced by. It has empowered me to face my fears and not run from the more difficult things in life — like climbing mountains. And now, it has given me an occupation in which I have the opportunity to utilize the best of my skills for the sake of something that I feel has quite potentially saved my soul. I’m excited to do what I can to grow this community and sport — so that maybe I can give others the inspiration and gifts that have been given to me.